Hi! We’re Lisa Henry and J.A. Rock, the authors of TEMPEST. We’re touring the web taking about our influences, our processes, anything we can think about actually, and even giving you guys a sneak peak or two! And what would a blog tour be without a contest? Check out the details at the bottom of the post to see what you can win!

In this excerpt from TEMPEST, Henry is schooled in the art, sorry, the science of disguise by Cory, Mac’s niece.

A thump from upstairs brought him back to reality. He shook himself like a dog coming in from the rain. Set his glass down and headed to Cory’s room to see if she and Vi wanted to learn three-card monte. He knocked on the door.

He entered to find Cory wearing a sparkly silver top hat and a fake mustache. Viola had on a cape. Cory’s laptop was open, a BIOHAZARD sticker faded next to the trackpad. They both glanced at him, giggling.

“I’m teaching Viola about the science of disguise,” Cory announced.

“Oh?” Now there was a science Henry could get behind.

No kidding. Maybe he didn’t have to teach the kid three-card monte after all. He wouldn’t be surprised if she already knew how to play.

“Yes.” Cory removed her glasses and rubbed the lenses on her shirt. “You can disguise yourself as someone other people expect to see.”

Like your twin sister. He thought about the fiasco at St. Albinus. Or a detective at a crime scene.

“But sometimes,” Cory went on, “you can disguise yourself as the unexpected. Instead of focusing on who you actually are, people will focus on how they never expected to see anyone like you.”

Like Henry Page. Poor Mac. Never expected to get saddled with Henry.

Except Mac had focused on who Henry actually was—to an uncomfortable extent. He had thought that being unfamiliar, unpredictable, and thoroughly annoying would keep Mac away from the truth. And yet Mac had homed right in on the parts he most wanted to keep hidden.

“That’s pretty smart,” he said. It was Conning 101, and Cory knew her stuff. “I certainly didn’t expect to see a magician and a magician’s assistant when I came up here.”

“Which one of us is the magician?” Viola asked.

“I’m not sure.” He looked them both up and down. “I mean, you have a cape, but Cory has a top hat. Which one of you is hiding the rabbit?” 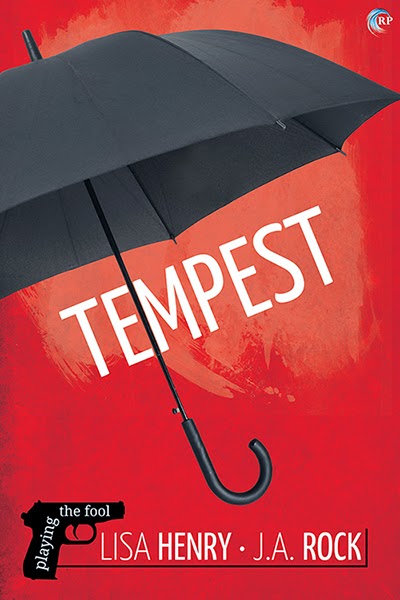 Something wicked this way comes.
FBI Agent Ryan “Mac” McGuinness and con man Henry Page are on the run again. This time they’re headed back to where it all began: Altona, Indiana. Population: some goats. Henry’s not happy about lying low at the McGuinness family farm, but they’ve got nowhere else to go.

While Mac fights to clear his name and Henry struggles with whose side he’s really on, a ghost from the past threatens to destroy everything. And those aren’t the only storms on the radar. Cut off from both sides of the law, Mac and Henry must rely on their tenuous partnership to survive.

If Henry can convince himself to let Mac see the man behind the disguises, they’ll stand a chance of beating the forces that conspire against them. The course of true love never did run smooth, but for the two of them, it might be their only hope.

You can check out TEMPEST at Riptide.

The Giveaway: Thanks for following our tour! To celebrate our release, we’re giving away an awesome prize – an ebook copy of a novel of your choice from either of our back catalogs. We’re also giving away a $20 Riptide gift voucher, and some comfy items picked especially for you by Henry: a pillow shaped like a donut, and a pair of donut-themed socks.

All you have to do is leave a comment on this post with a way for us to contact you, be it your email, your twitter, or a link to your facebook or goodreads account. Please put your email in the body of the comment, not just in email section of the comment form, because we won’t be able to see it otherwise! On March 20, 2015, we’ll draw a winner from all eligible comments! Be sure to follow the whole tour, because the more comments you leave, the more chances you have to win the prize!
Email Post
Labels: Blog tour Riptide

waxapplelover said…
Love Henry! Thanks for another great excerpt.

Antonia said…
I really enjoyed this book! Love Henry, and Cory and Viola were great. amaquilante(at)gmail(dot)com
March 12, 2015 at 7:59 PM

H.B. said…
LOL. Cory and Viola seem like awesome kids. Thank you for the excerpt =)

Lisa G said…
Cute excerpt! This series looks awesome and I've moved it to top of the my wish list. Thanks for the chance of winning a copy of Tempest!
lgrant1 at san dot rr dot com
March 13, 2015 at 9:43 PM

Unknown said…
This series sounds like so much fun - Exactly the kind that I like! Humor, mystery and romance nothing could be better!